Social media has effectively turned customers into broadcasters. We all know the old statistics that a satisfied customer will tell 2-3 people about their experience with a company while a dissatisfied consumer will tell 8-10. Platforms like Facebook and Twitter where a post or tweet can be shared thousands of times have amplified those numbers exponentially. 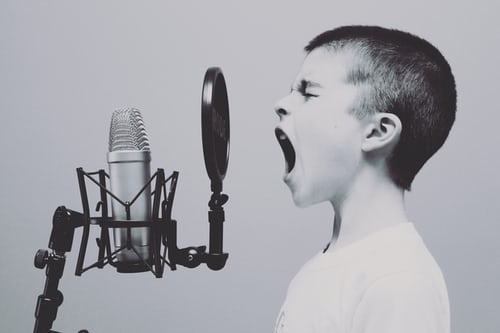 Over the last few years we’ve seen a lot of damage to brand equity when a dissatisfied customer took to social media and then went viral. In today’s post I want to look at something different though. These next few customers were so frustrated by their experiences with companies that they actually spent considerable amounts of time and/or money to vent their anger with the intention of damaging that company’s brand.

United Breaks Guitars
As he was sitting on the tarmac waiting to disembark his Delta Airlines aeroplane, Dave Carroll looked out the window to see luggage handlers throwing his band’s guitar cases around as they were being unloaded. Upon discovering that his $3,500 Taylor guitar was broken as a result of this, he complained to the airline.

The airline’s response was less than sympathetic: they claimed he had waited longer than 24 hours to process a claim, and was therefore not eligible for compensation. For nine months, Dave went backwards and forwards with United trying to his claim processed. The response was always a firm and consistent “no.”

It went viral and within four weeks, United’s stock price had dropped by 10% – a decrease in valuation of $180 million.

As of this morning, the song has now had over 14.3m views on YouTube. Add to that the press coverage that has since accompanied its release and this has been a public relations disaster for United.

Don’t Fly @BritishAirways
United isn’t the only airline to be publicly humiliated by an angry customer though. When British Airways lost the luggage of Hasan Syed’s father and then neglected to reply to emails, Hasan didn’t just vent his dissatisfaction to his 500+ followers. No, Hasan paid US$1,000 for some promoted tweets. 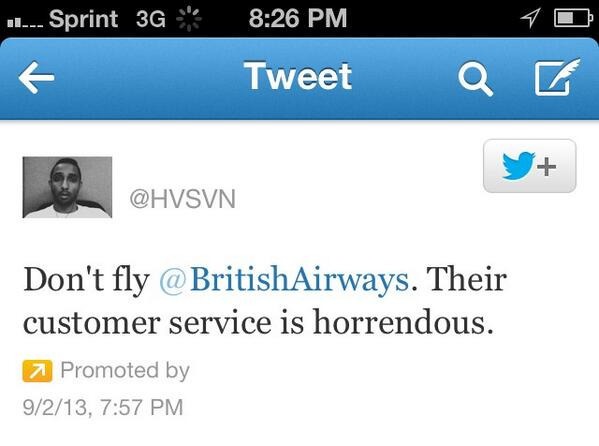 In addition to this, he tweeted “BritishAirways is the worst airline ever. Lost my luggage & can’t even track it down. Absolutely pathetic.” and  “Thanks for ruining my EU business trip #britishairways. I shouldn’t have flown @BritishAirways. Never flying with you again.”

He targeted his ads at all 302,000 followers of British Airways and vowed to continue running the ads until “BA fixes this mess.”

Eight hours after the first tweet and after the tweet had been picked up by news sites, the airline meekly tweeted back, “Sorry for the delay in responding, our twitter feed is open 0900-1700 GMT.”

That was back in September, 2013. BA’s twitter account (now @British_Airways – I wonder if this episode was the reason they changed their handle?) now proclaims “We love reading your tweets & are here 24 hours a day, 7 days a week to help.”

Bad News Billboard
George Prokas bought a phone for his son from South African telco Cell C in 2013. Unfortunately for Prokas, the phone’s number belonged to someone else, who ran up a bill of R5,000 (just over A$500) by the time it was detected and fixed.

Prokas was unaware of the unpaid bill until he tried to buy a car earlier in 2014 when he was told he was listed as a bad debtor. He sought to have the bill waived by Cell C and to be removed from the list of bad debtors but got nowhere with the company.

One of his employees explains what led to his next action:

“We tried every which way to get hold of somebody, anybody to speak to at Cell C to explain to Cell C what the problem was, and we were stonewalled all the way. We could never get through to anybody senior; we eventually got one e-mail address but they block all the other e-mails and when we couldn’t get any further my boss sat me down and said ‘this is what they do to every little man out there, I’ve got money! On behalf of everybody watch me I’m gonna put up a board and then we’ll see what they do’.”

In early November, 2014, put up a board he did. On a busy intersection in Sandton, just outside of Johannesburg, Prokas paid R61,000 (~A$6,500) to have a huge billboard erected claiming that (in his opinion – this was in very small writing) Cell C was “The most useless service provider in SA”. For good measure he included the name and phone number of the Franchise Manager who in his opinion had been unhelpful.

Rather than try to solve the customer’s problem, Cell C chose to fight him in court taking legal action against Prokas and the World Wear shopping centre to have the banner removed. They lost and were ordered to pay Prokas’ legal costs. The billboard remained up.

After much publicity, the CEO has since expressed his disappointment that the company failed its customer.

Hijacked Domain
When HSBC sold Christopher George what he thought was unnecessary insurance on a business loan that in his words played “a part in the demise of (my) business”, he took matters into his own hands.

In September 2014, George trademarked the domain name for HSBC’s original name, The Hong Kong Shanghai Banking Corporation, and set it up as a sperm bank.

thehongkongandshanghaibankingcorporation.com is no longer active but George says his point was made:

“Many people in my position would have no idea how to stand up for themselves against a financial behemoth such as this –- but in registering this domain name, I have proven that there are ways in which these banks can be got at, in the most public manner.”

These are just 4 examples of extreme measures that customers have taken to right perceived injustices. In each case their stories went viral, got picked up by the media and the brand damage was enormous.

If your company has policies that could to lead to this type of anger (and with rigid, non-customer-focussed policies this is often the case), I don’t need to tell you how important it is that you have escalation processes that will deal with customer complaints before they get to this point.

In today’s hyperconnected world its a must.