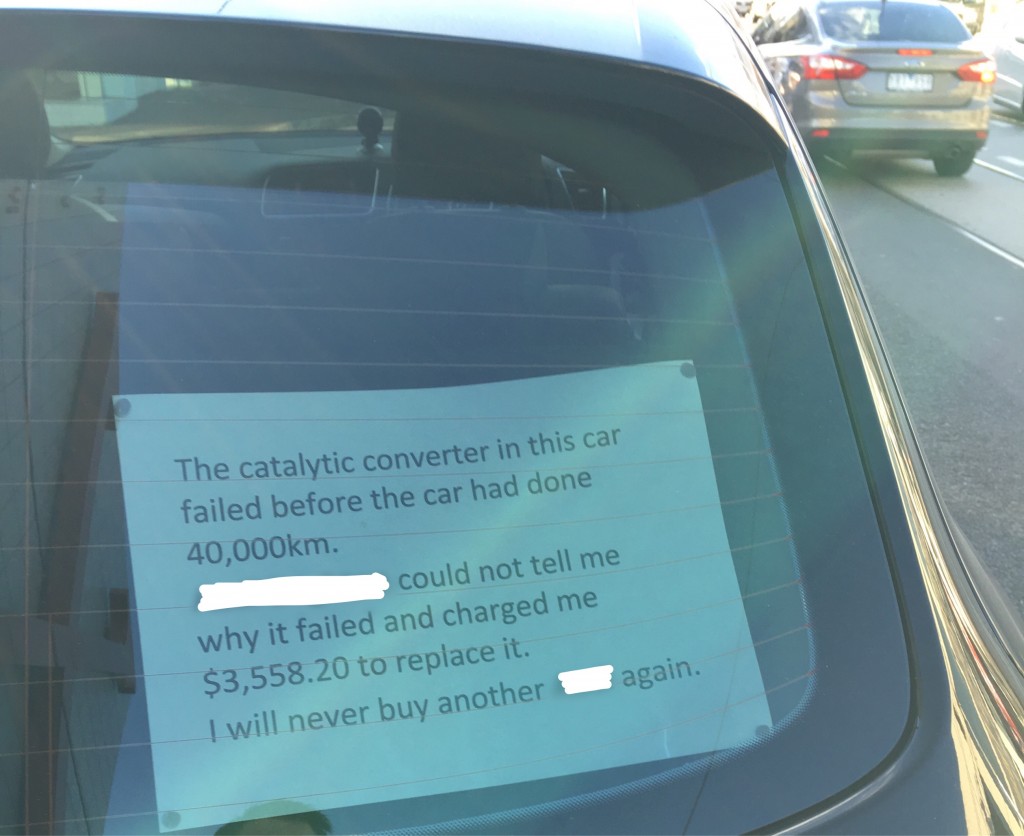 I walked past this vehicle in the street the other day and it got me to thinking about Detractors – how could it not? The owner of this vehicle was clearly so upset at the breakdown of trust between them and the brand that they were willing to risk the resale price of the car just to let other owners know about their experience.

On the scale of Detractor-ness (yes I just made that word up) this isn’t even that drastic. I’ve written in the past about customers who took extraordinary action against companies after being left frustrated by their lack of service. In the automobile industry in Australia, though, consider the story of Ashton Wood who preferred to destroy his $49,000 car with which he’d had 22 separate issues rather than on-sell it to someone else. Or Teg Sethi who spent $8,000 to make a rap video denouncing the manufacturer after his $60,000 vehicle was beset with problems.

The average person won’t go to the lengths these two gentlemen did to get their point across. They may put a sign on the back of their car but chances are they’re much more likely to take their grievance online.

Harvard Business Review research from July, 2010 found that 48% of customers who had a negative experience told 10 or more others. At that time, there were about 500 million Facebook subscribers and 40 million active monthly users on Twitter. Those numbers today are 1.6 billion (over 3x) and 310 million (almost 8x) respectively. I think it’s fair to say that the “10 or more others” are probably now more like 30 or more. In an age when customers can quickly and easily reference one another through the likes of social media, review websites and forums, Detractors have effectively been handed a megaphone.

According to a Nielsen Global Trust in Advertising survey, the two most trusted forms of brand information are friends and family (92% of consumers) and online consumer opinions (70% of consumers). By taking their displeasure with a brand online, Detractors therefore have the potential to cause significant damage.

The implication for companies is that they need to have robust dispute resolution processes in place to stop Detractors becoming Active Detractors. This is especially so in industries with high Customer Lifetime Values like the automotive industry.

So what does this entail?

When the total cost of a Detractor is considered – the lost business of one customer and potentially many more – it makes good financial sense for companies to do what they can to avoid customers becoming frustrated, angry and active.

What actions have you taken after a poor customer experience? Did you get satisfaction from doing it?